Yhteinen pöytä (‘Shared table’) operates in Vantaa, developing networks of community-centred food aid with food waste from supermarkets at the core of the operations.

Small doors lead into a large industrial unit. The sunlight shining through the skylights falls onto food waste packed in cardboard boxes.

Project Manager Hanna Kuisma from Yhteinen pöytä goes over the food waste currently sitting in the terminal. It includes bottled water, fruit, frozen foods, numerous bags of bread and a palletful of coal for BBQ.

It is difficult to imagine a situation where coal would become useless, apart from when it is burned. And yet, here it is in an industrial unit in Koivukylä, Vantaa, labelled as food waste.

Half a million kilos of food waste a year

Yhteinen pöytä’s food aid network consists of 35 donors and 65 food aid operators. Around half a million kilos of food waste received from donors travels through the terminal every year. Yhteinen pöytä is responsible for distributing the food waste onwards to operators providing food aid.

‘We have four employees hired by the city and two by the Parish Union working here at the terminal in administrative roles. In addition to that, we have former long-term unemployed people running the actual logistics, working as drivers and warehouse workers,’ Kuisma says.
Even though Kuisma is excited about the work that Yhteinen pöytä is doing to reduce food waste, she points out that half a million kilos is a small portion of all the food that is still edible but goes to waste in Finland. A total of 65–75 million kilos of food waste is produced annually in supermarkets alone.

We are currently able to pick up food waste from around 20 shops, ten wholesalers and five factories, which is only a tiny portion of all the food sector operators in the Helsinki metropolitan area. The amount of food waste created in Vantaa alone is impossible to calculate, because there are so many operators.Hanna Kuisma

Kuisma also thinks it regrettable that supermarkets consider food waste data a business secret. It is difficult to understand why they do not want to disclose information about their food waste amounts and general categories to food aid operators, even though this information would help them utilise the waste more efficiently and improve the predictability of the entire chain.

During its five years of operating, Yhteinen pöytä has found its place in the food aid sector in Vantaa. When thinking back to the early days, Kuisma sighs and says that finding their own role amongst all the operators has been a long and arduous project for the entire team.

‘Food aid operators often think that they are working alone. Getting the network members to understand that they can work together and benefit from one another has taken several years. Now it would seem they are realising that we are all on the same side and not competing against each other.’

These days the people at Yhteinen pöytä feel proud of having managed to make food aid more community-centred and professional and having created high-quality logistics for distributing food waste. Centralised transport via the food waste terminal has improved the quality and predictability of the food waste products and made the work of the aid providers easier.

The City of Vantaa and the Parish Union have had an important role in building the network, and they have been supporting Yhteinen pöytä’s operations from the beginning. On the other hand, Kuisma feels slightly sceptical about this kind of cooperation, because there is a danger of large operators trying to create a specific model for all Finnish food aid. Sustainability is guaranteed by developing unique and diverse networks for every region together.

‘The operations in some locations will not be city-led and nor should they be. If the work in an area has been run by NGOs for years, why should the model be changed? When building our network, we too have understood that the structure of the system is less important than having functional food aid, which is the core value of the operations.’

The City of Vantaa and the Parish Union support the network’s operations with approximately 500,000 euros per year. Kuisma thinks that the fact that this amount covers everything from the staff wages and stationery to the running costs of the terminal and the vehicles describes the operations’ efficiency well.

‘And if you also consider that every week between five and ten thousand residents of Vantaa receive food aid through 65 network members in the form of food bags and served meals, alongside a whole range of other services, you can truly call the operations successful!’

When asked about the future, Kuisma replies that they will continue to work for as long as there is funding and food waste. We will see which one will run out first.

With nearly 500 employees in Ii, unused office furniture such as desks, chairs and cabinets take up a lot of expensive storage […]

In the residential area of Hiukkavaara in Oulu, sustainable design of waste management was already taken into account at the planning stage. […]

All Ii schools and day care centers are involved in energy monitoring, which monitors monthly consumption of heating, electricity and water and […] 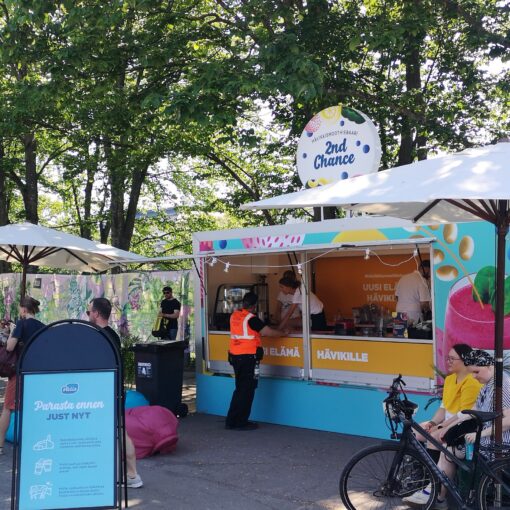